Tulsi Gappard Sues Hillary Clinton For $50 Million For Lying… Why Did It take This Long To Know Hillary Is A Liar?? 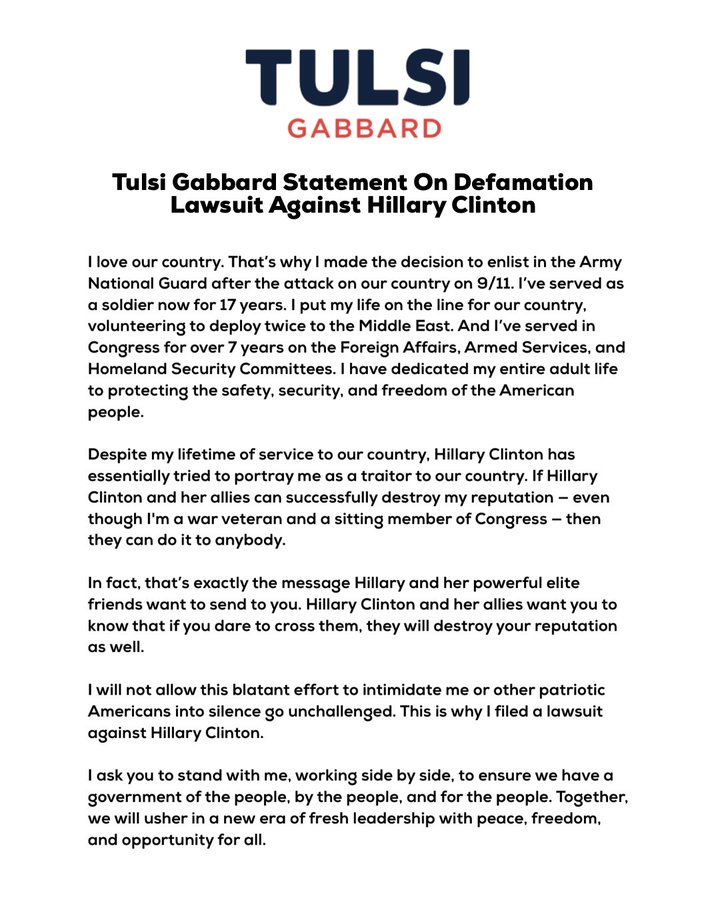 UNITED STATES DISTRICT COURT
SOUTHERN DISTRICT OF NEW YORK
Tulsi Gabbard and Tulsi Now, Inc.,
Plaintiffs,
v.
Hillary Rodham Clinton,
Defendant.
Civil Action No. ___________
COMPLAINT
JURY TRIAL DEMANDED
Plaintiffs Tulsi Gabbard and Tulsi Now, Inc. (collectively, “Tulsi”) bring this lawsuit against Defendant Hillary Rodham Clinton (“Clinton”) for defamation. Tulsi Gabbard is running for President of the United States, a position Clinton has long coveted, but has not been able to attain. In October 2019—whether out of personal animus, political enmity, or fear of real change within a political party Clinton and her allies have long dominated—Clinton lied about her
perceived rival Tulsi Gabbard. She did so publicly, unambiguously, and with obvious malicious intent. Tulsi has been harmed by Clinton’s lies—and American democracy has suffered as well.
With this action, Tulsi seeks to hold Clinton, and the political elites who enable her, accountable for distorting the truth in the middle of a critical Presidential election.
20-cv-558

NATURE OF THE CASE
1. Tulsi Gabbard has lived her life with one guiding principle: putting the needs of
others before her own. That’s why she joined the Army National Guard. That is why she campaigned for and was elected to the United States House of Representatives. And that is why she is running for President.
2. Living by this principle, Tulsi has put the country’s needs above all else—even
when it means hurting her political career. For example, in February 2016, Tulsi believed the best Democratic presidential candidate for our country was Senator Bernie Sanders. She also knew that Clinton had a stranglehold over the Democratic party and that crossing Clinton (who considered herself the “inevitable nominee”) could mean the end of her own political career. Yet Tulsi put the country before herself, and she publicly endorsed Senator Sanders, becoming the most prominent politician to do so at the time.
3. Clinton—a cutthroat politician by any account—has never forgotten this
perceived slight. And in October 2019, she sought retribution by lying, publicly and loudly,about Tulsi Gabbard. Specifically, in widely disseminated national comments, Clinton falsely stated that Tulsi—an Army National Guard officer and United States Congresswoman who has spent her entire adult life serving this country—is a “Russian asset.” Clinton’s false assertions were made in a deliberate attempt to derail Tulsi’s presidential campaign. 4. Clinton had no basis for making her false assertions about Tulsi—and indeed, there is no factual basis for Clinton’s conspiracy theory. Clinton’s peddling of this theory has harmed Tulsi, has harmed American voters, and has harmed American democracy. Tulsi brings this lawsuit to ensure that the truth prevails and to ensure this country’s political elites are held accountable for intentionally trying to distort the truth in the midst of a critical Presidential election.
PARTIES
5. Tulsi Gabbard is a natural person who is a citizen and domiciliary of the State of
Hawaii.

59. The Defamatory Statements were a substantial factor in causing Tulsi to suffer
economic loss, in an amount to be proven at trial. At present, actual damages are estimated at $50 million—and counting.
60. In addition to actual damages, Tulsi is entitled to appropriate special and punitive damages of in view of Clinton’s malicious and unrepentant conduct. The amount of these damages will be proven at trial, but in no event should they be less than the amount of Tulsi’s
actual damages.
PRAYER FOR RELIEF
Tulsi demands judgment against Clinton as follows:
i. An award of compensatory, special and punitive damages in appropriate amounts to be established at trial;
ii. Injunctive relief prohibiting the publication or republication of the Defamatory
Statements; iii. An award of Tulsi’s costs associated with this action; and
iv. Such other and further relief as the Court may deem just and proper.

Is Islam Violent or Non-Violent? Do Muslims Hate Non-Muslims? How Can They Be Stopped?

Ugly Women Condemns RBG For Not Making It To 2021