Black people can’t get modeling jobs as easy as they used to according to one UK company that removed their photograph of a black boy whom they used as a model in a hoodie top bearing words ‘Coolest monkey in the jungle’ after condemnation. 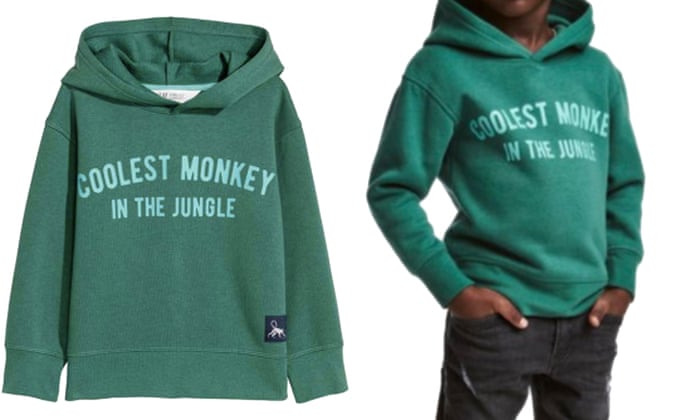 H&M has apologized for an advert showing a black child in a green hoodie bearing the words “Coolest monkey in the jungle”.

The ad sparked a backlash on social media, with some calling it inappropriate, disgusting and negligent.

The image of the model in the green hoodie has been removed from the H&M website; two similar designs modeled by white children remain showing it’s OK to call white children monkey’s.

One H&M hoodie bears the words “Mangrove jungle” and “Official survival expert”; the other has outlines of various animals including giraffes and tigers.

The Labour MP Kate Osamor tweeted: “I was totally shocked, dismayed to say the very least, to find this online imagine. H&M, do you think this imagery is an appropriate representation of a young black boy?” OTOH, it’s a hoodie. Hoodies are favored by…. oh, never mind…

Alex Medina, (we don’t know who he is either) who works in H&R brand design, tweeted: “In the year 2018 there’s no way brands/art directors can be this negligent and lack awareness. If you look at other sweaters in same category, they have white kids. We have to do better.”

A person tweeting under the handle vulkaanrots said they would boycott the store: “So the black kid gets to wear the H&M sweater with ‘Coolest monkey in the jungle’ and the white kid with ‘Survival expert’. This is beyond disgusting.

“It’s a projection of your neocolonial thinking. You won’t see me anywhere near your shops these days HM.”

A spokeswoman for the retailer said: “This image has now been removed from all H&M channels and we apologize to anyone this may have offended.” No apologies for those who weren’t offended.

Trump Won By 2.80 Million Votes In The Six Contested States… Here’s The Proof

McCain Definitely Not A War Hero..

Ann Counter Demands Latitude and Longitude Of Trumps Wall, …. Why?

THIS WEBSITE IS THE DECISION BETWEEN HONEST ARROGANCE AND HYPOCRITICAL HUMILITY….and it’s implicit “Rational Individualism”