Tattoo Or Not? ……. Evidence Shows Cancer Connection….. With Tattoo Proceedure and With Tattoo Removal

Getting And Removing A Tattoo Is Surgery. Tread Carefully.

Headline: “Trend for larger tattoos masks a deeper problem of toxins and the skin”

There are now justified concerns that rampant large-surface area body tattooing is joining the list of other risks that include excessive drug and alcohol-taking and unprotected sun and sex. And along with this come the inevitable spikes in health problems such as melanoma rates and liver cirrhosis. Here’s one proto of a tattooed butt. 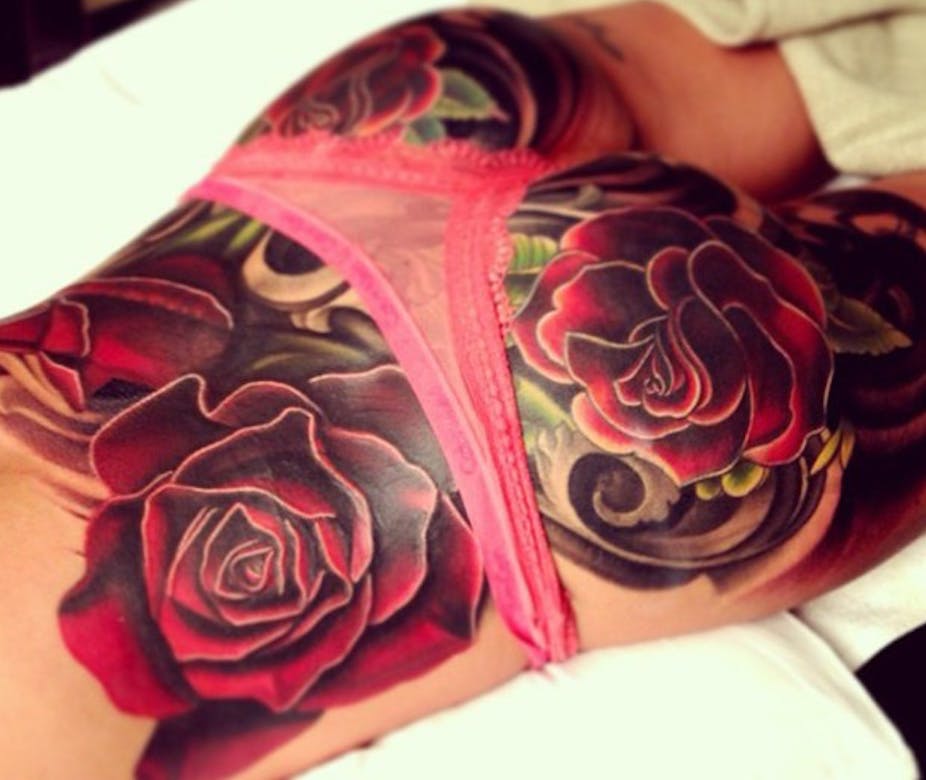 Tattooing may seem like just a piece of skin art, but it involves the deep injection of potentially toxic chemicals into the skin.

There is no doubt some of the chemicals in tattoo ink have been associated with cancer.

The red colours can contain mercury which causes cancer in rats and growth problems in babies of exposed women. But no definite evidence exists of linking mercury exposure in humans to cancer.

The greens and blues contain cobalt, which has been found to cause cancers in animals – however, the risk in humans needs to be explored further.

One component of black ink, benzo(a)pyrene, is a potent cancer-causing chemical and has been linked to skin cancers in petroleum workers.

Last year, Jorgen Serup, Professor of Dermatology from Copenhagen University, reported that 13 of 21 tattoo inks commonly used in Europe contained cancer-causing chemicals. Even the tattoo ink manufacturers admit that 5% of their products contain these types of chemicals.

Some suggest either scrape away the skin or burn it off with a laser. Ebay lists loads of do-it-yourself tattoo removal gadgets up to $1.229.00 to remove a tattoo.

There is much to learn about this subject. People are only just beginning to look at the potential medical complications of tattooing including: infections, carcinogenic properties, the potential for ink to cause mutations and allergies, and there is already emerging concern that tattoo ink-associated chemicals can be rendered more unstable by attempts to remove them, especially by lasers. One wag suggests you should encourage people you don’t care for to get tattooed.

Why Not Let Nature Take Care Of Skin Color Differences Instead Of Forcing It Down Our Throats?

Hillary’s Swan Song: They Weren’t Classified When I Took Them. And If They Were I Never Took Them. Pay no attention to the connections with the fundraising

Harry Is Besotted WIth Troubled, Mixed-Raced Meghan Markle, A Roadside Bomb. Her Dad Says She Cheapened The Royal Family and Turned It Into A Walmart With A Crown On It. It Into